Puerto Galera is a place that is as breathtaking as it is historic. Some four-and-a-half centuries ago, in the 1570s, the Spanish christened this location on the northern tip of modern-day Mindoro Province with a name that means “port of galleys”—a reference to the warships that brought many conquistadores from the Iberian Peninsula to this far side of the world. However, even before the Spaniards arrived, Puerto Galera was already known to Austronesian and Chinese mariners of old. Previously a part of the ancient barangay state of Ma-i, the place was known as a haven for troubled ships, providing shelter and succor to sailors stranded by tempestuous weathers. 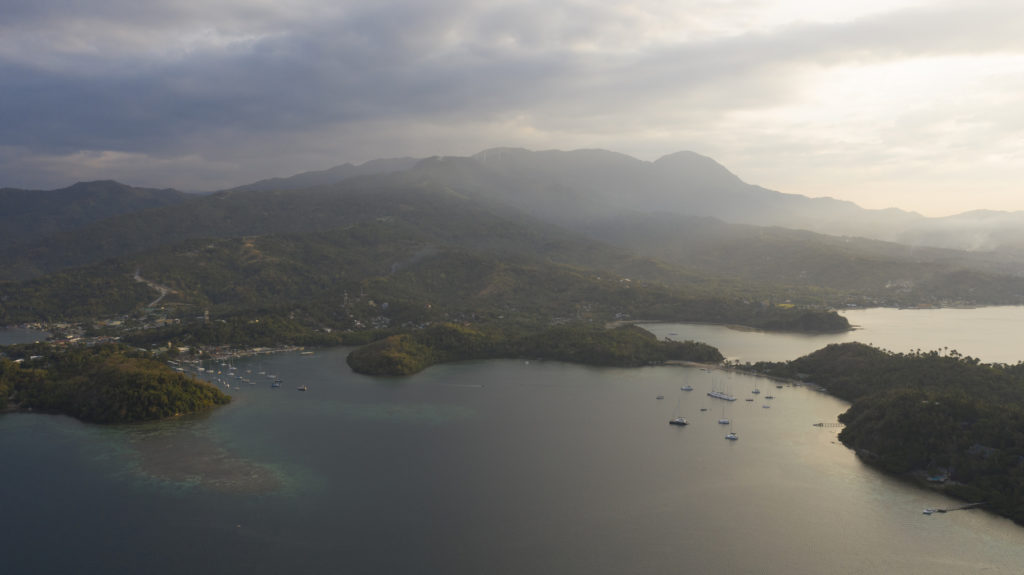 Today, Puerto Galera is a bustling Batangas municipality that is known for its pristine beaches and its exceptional snorkeling and diving spots. The Puerto Galera Bay is also frequented by many sailing enthusiasts, enamored by its aquamarine waters and the island’s white-sand shores. Behind this untarnished coastline are the emerald-colored foothills of the mountain ranges of central Mindoro, whose shrouded peaks dominate the landscape in the distance. 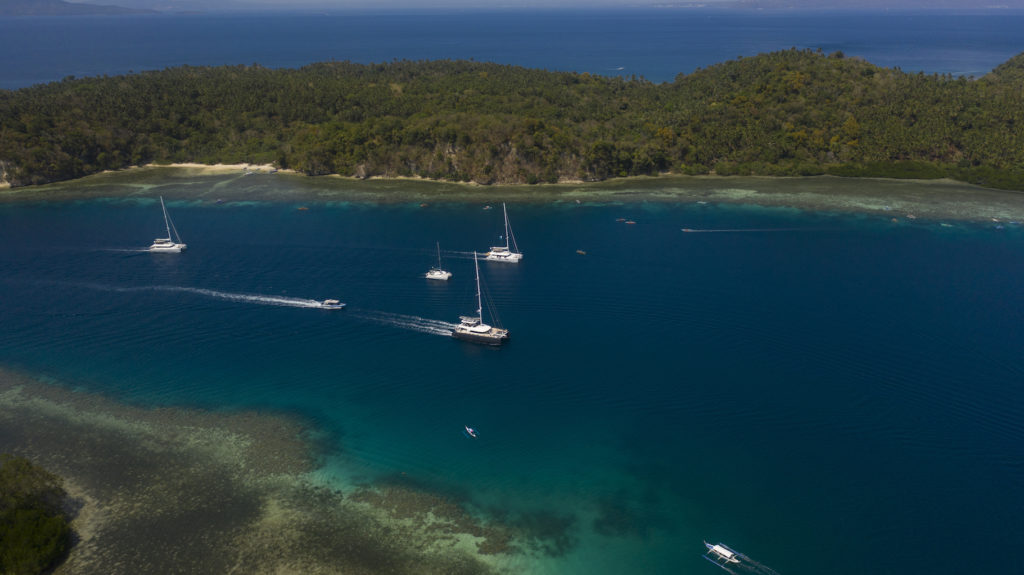 This popular Philippine destination became the main rallying point for Lagoon catamaran owners and other guests who participated in the Lagoon Escapade Philippines 2019, which took place between the 5th and 7th of April. First held last year, the Lagoon Escapade won the 2018 Lagoon Event of the Year, a recognition that was awarded by the Lagoon brand itself. Today the world’s number one catamaran maker, Lagoon is also part of the illustrious French boatbuilding conglomerate Groupe Bénéteau.

The second edition of the Lagoon Escapade—a sailing rally that took 11 Lagoon catamarans and more than a hundred guests from Punta Fuego in Batangas to Puerto Galera in Mindoro—was once again spearheaded by Europa Yachts, the Philippines’ premier yachting authority and exclusive distributor of Lagoon catamarans in the country. Palawan Sailing, the Philippines’ only accredited sailing school, was also designated as technical partner for this year’s event. 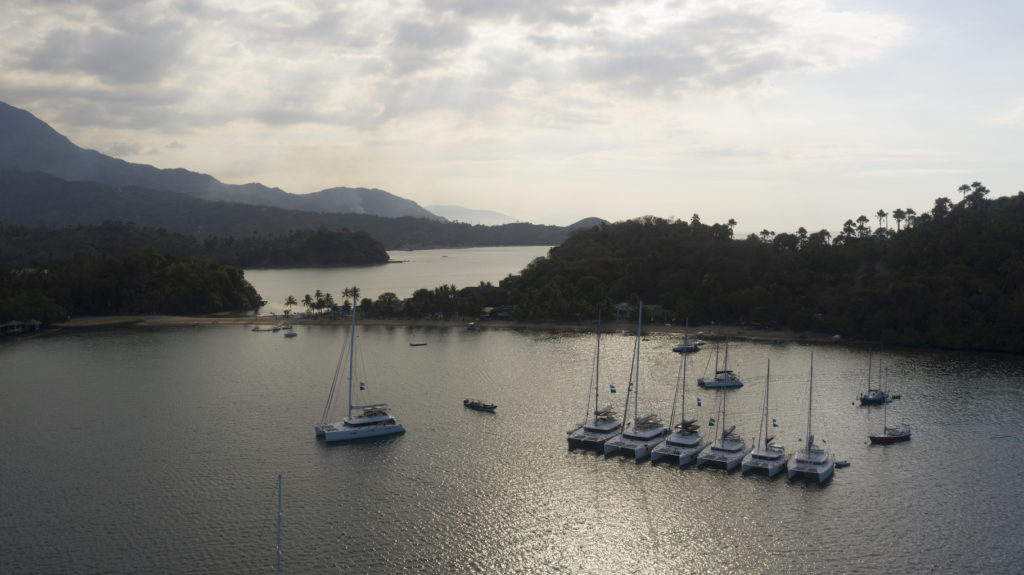 The adventure began in the afternoon of the 5th of April at Punta Fuego Yacht Club’s Barracuda Bar, where the guests listened to the Captain’s Briefing and celebrated the official opening of the Lagoon Escapade Philippines 2019.  Europa Yachts Director of Marketing and Business Development Richard Sarinas, Europa Yachts General Manager Thomas Cachera, and Lagoon Commercial Director Thomas Gailly all afforded words of welcome and gratitude, thanking Lagoon’s Philippine customers for their patronage of the brand. Also gracing the event with their presence were Lagoon Asia Pacific Director Vianney Guezenec and Groupe Bénéteau Asia Pacific Customer Service Manager Loik Morgant. 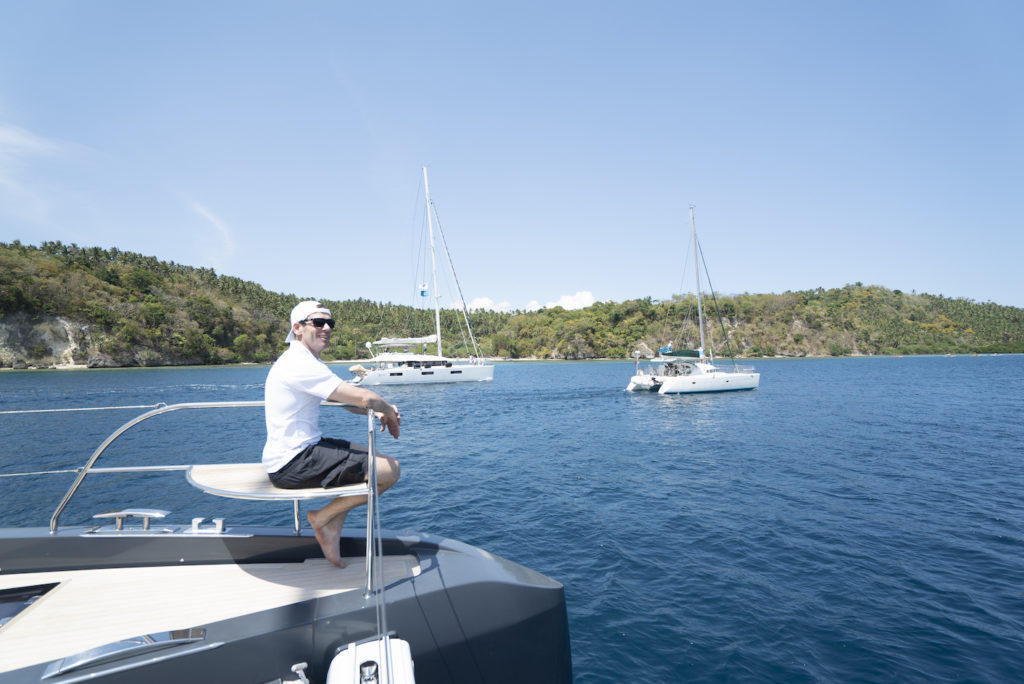 The following day, the 6th of April, the participants woke up to a beautiful morning and prepared in earnest for the sailing rally from Punta Fuego to Puerto Galera. Like modern-day galleons under graceful white sails, 11 majestic Lagoon catamarans left the marina and cruised through the idyllic waters of the Verde Island Passage. Participants delighted in this one-of-a kind experience in which they sailed with other Lagoon aficionados from all over the Philippines, enjoying the camaraderie with erstwhile strangers as one would with longtime friends. 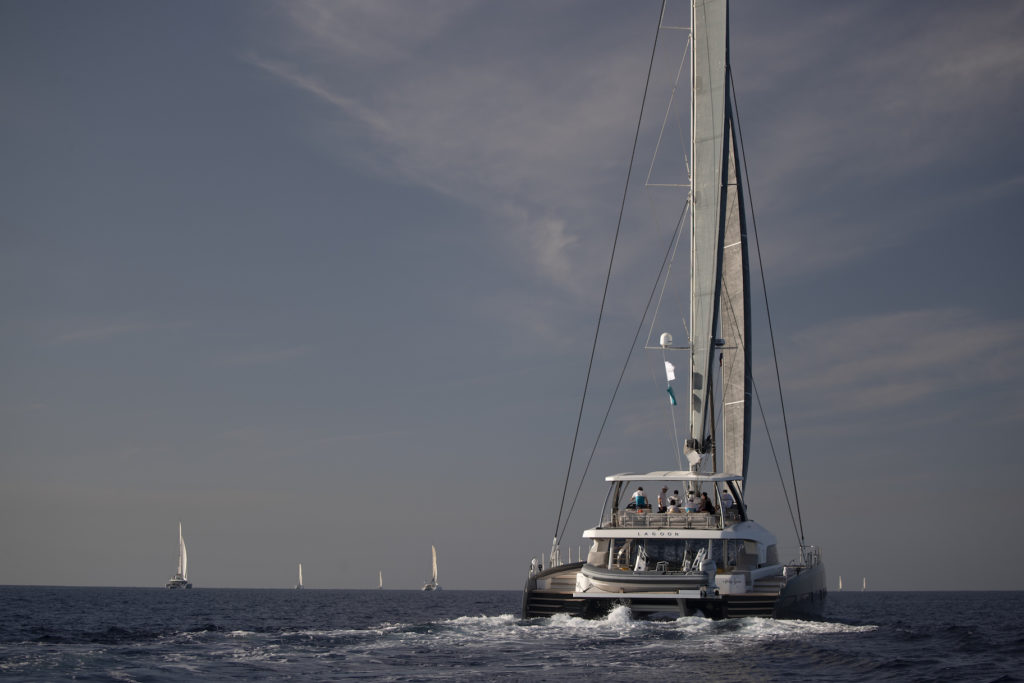 Thanks to the ocean’s serene temperament and the strong tailwinds that propelled the fleet forward, the first of the Lagoon catamarans to set sail arrived in Mindoro much earlier than expected. This meant more time for the early birds to explore the blissful environs of the Puerto Galera Bay while they waited for the others to arrive!

One by one, the boats reached the final mooring point at the Elizabeth Hideaway Resort in Muelle, Puerto Galera, arriving like members of a family long sundered by time and distance. By early afternoon, the Lagoon fleet was finally complete, and what a great sight it was to see them all docked together surrounded by the beauty of the bay! This year’s participants comprised vessels from all over the country. 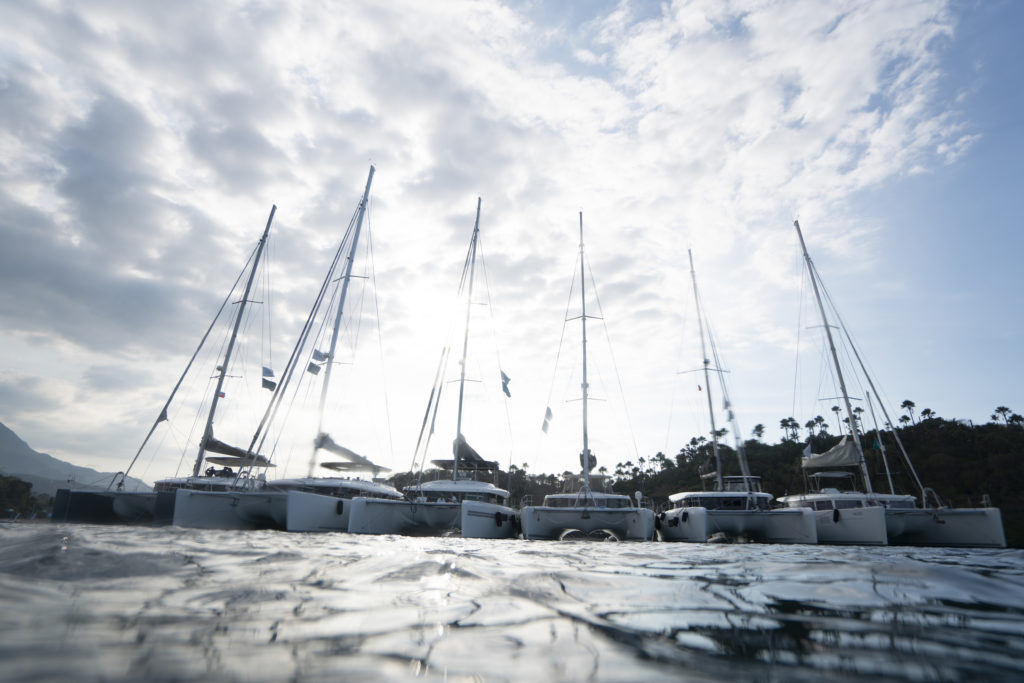 Soon after arriving, the guests began pouring into the resort’s Hideaway Restaurant, where they were welcomed with floral leis, fresh coconut juice, and an acoustic band that played happy island music. A delightful smorgasbord of Filipino merienda favorites were also served, including pansit, puto, kutsinta, sago’t gulaman, saba con hielo, and an assortment of tropical fruits. It was all but a short preview of the things in store for everyone, as this was to be a day of pure gaiety and entertainment. 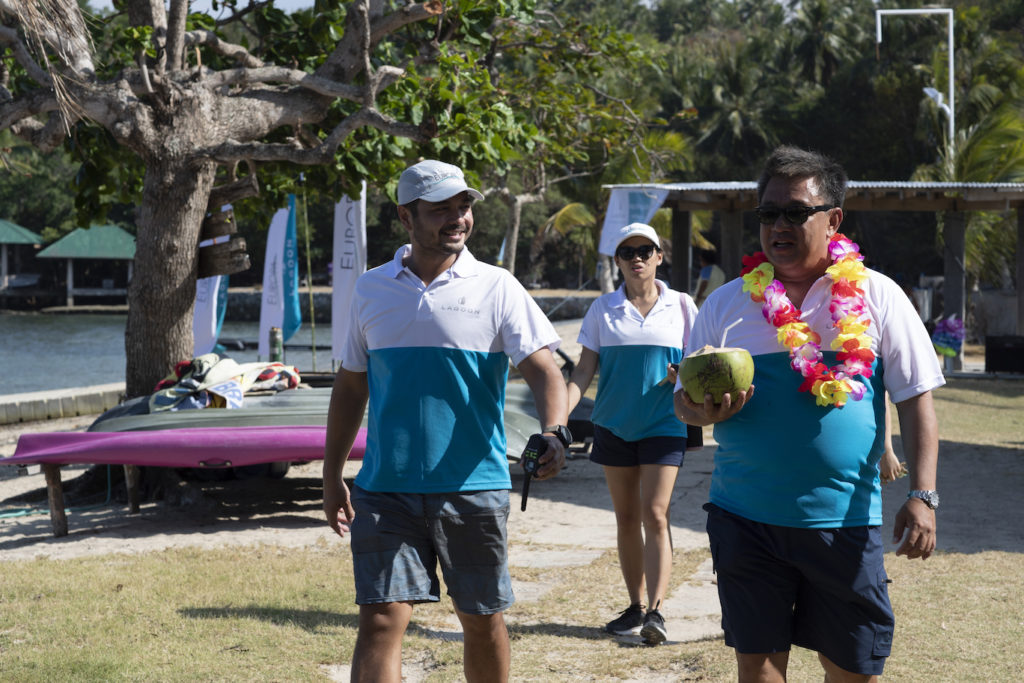 Late in the afternoon, the participants joined a sunset barbecue event in which an array of seafood inihaw classics and Lagoon-themed cocktails were prepared. The bar—manned by bartenders from Diageo Philippines—dished out beverages like the Lagoon Mule, a mixture of Singleton of Dufftown 12, ginger ale, and lime juice, and the Seventy7 Fizz, a concoction composed of Singleton of Dufftown 12, apple juice, lime soda, and rosemary. The barbecue event also heralded the start of the first round of team games, which tested the guests’ mettle in guesstimating figures and deducing the meaning of foreign words. It was a lovely and relaxing occasion held at Elizabeth Hideaway’s garden by the beach, a perfect spot for awaiting the arrival of the golden hour. 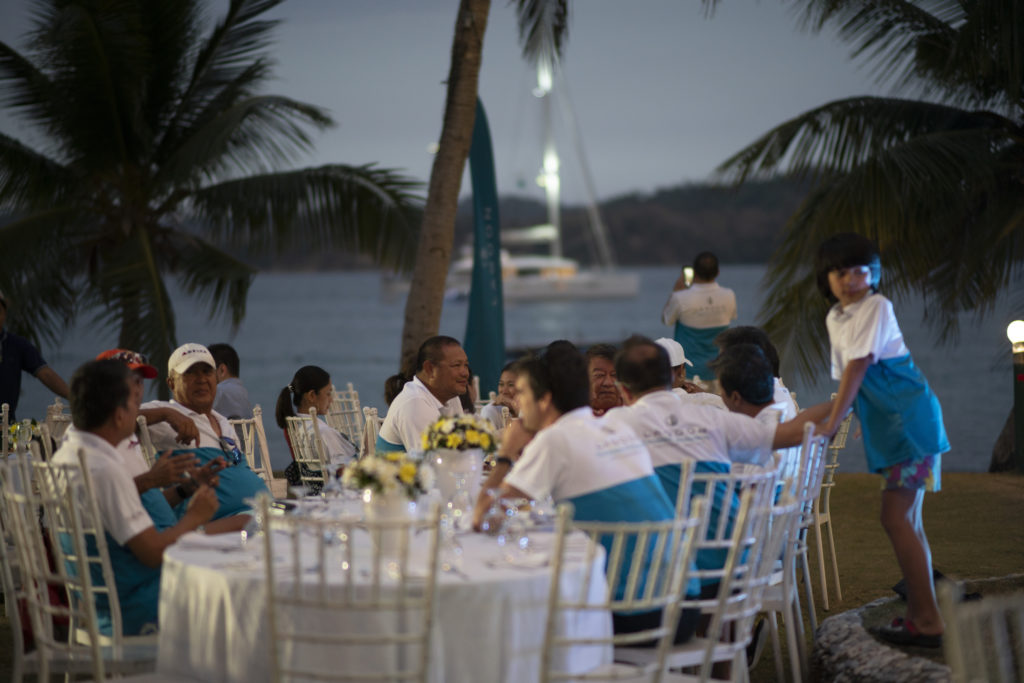 It didn’t take long for the Lagoon Escapade Philippines 2019’s early evening program to open with a song number from a talented band. The soirée featured a delicious buffet dinner with lechon, a whiskey tasting event headlined by Scotland-trained whiskey expert Rian Asiddao, and the second round of the team games. This time, the guests participated in contests which tested their abilities in word associations, in drawing random objects with accuracy, and in guessing songs that contained specific words. The participants dialed their competiveness up to eleven when they learned about the fabulous prizes that were in store for the winners. These included the following:

Numerous raffle prizes were also given to guests that evening, with the most coveted items and experiences being the following:

With all the great food, drinks, music, games, and prizes, the second Lagoon Escapade had all the elements of an unforgettable tropical island adventure—a veritable celebration of the Lagoon lifestyle, which values warmth and conviviality above all others.

The evening event lasted past the official hours and well beyond lights out, when the guests finally split into their own pockets of cheerful socials. The next morning, on the 7th of April, the Lagoon family gathered one last time for breakfast before sailing back home. Needless to say, each one of the guests went home content, grateful, and happily dreaming about future Escapades to come. 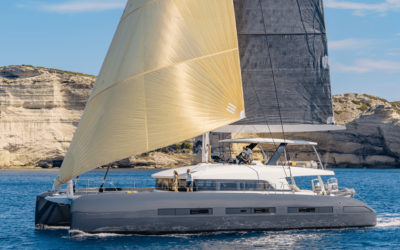 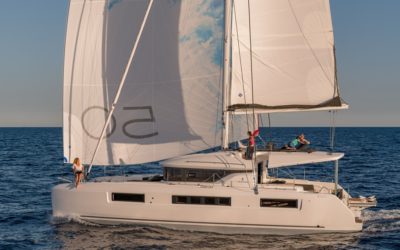